The Music of Semiramide – Rental 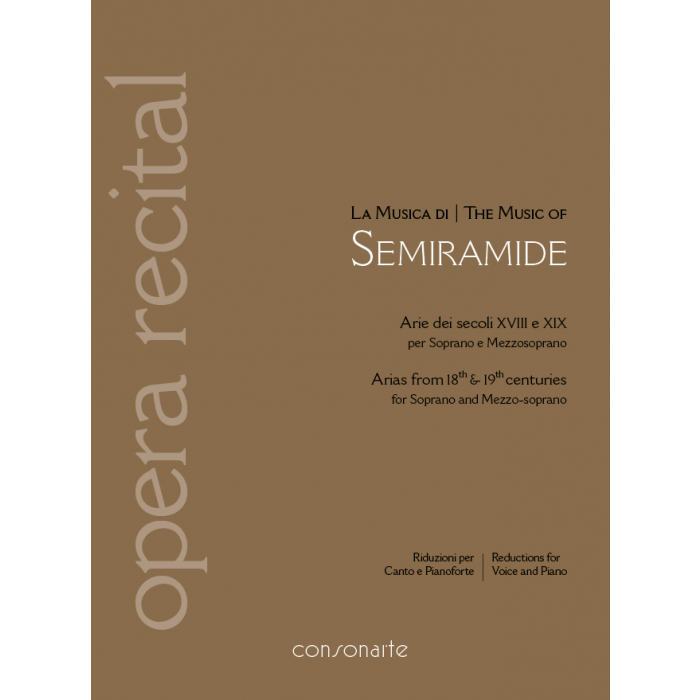 This is the first modern edition (and largely first edition in absolute) of Symphonies and Arias from Operas of the 18th and 19th centuries dedicated to the fascinating personality of Semiramide; the present editions are accompanying, in this rediscovering activity, the recording of Semiramide. La Signora regale (©2014 DHM-Sony), winner of The International Opera Award 2015.
Besides giving birth to an exciting musical journey on the traces of historical and human personality of the first Queen of the Orient, this collection is of a significant importance from a musicological point of view. In fact the publication of the scene from La morte di Semiramide – attributed to Sebastiano Nasolini and sung by Isabella Colbran in Naples in August 1815 – in which are contained large sections composed by Gioachino Rossini completely unknown before the mentioned recording Semiramide. La Signora regale (2014), is testifying de facto – albeit in disguise – Gioachino Rossini’s debut in Naples in an antecedent date compared to the one always believed.
Within the copious and particularly beautiful musical pages proposed (that consent also to bring to light composers today unjustly forgotten as Bernasconi, Bertoni or Borghi and, at the same time, to discover jewels less known by celebrated Porpora, Caldara, Händel, Jommelli and Paisiello), are indicated the intense cavatina «Son infelice, son sventurata», that has been discovered to have been written by Girolamo Crescentini, as well as «Al mio pregar t’arrendi» from Semiramis by Manuel García (Ciudad de México, 1828), “saved” from a state of serious deterioration that has made almost illegible the autograph manuscript.

Full Orchestra scores as well as Parties Scores of each piece are available for rental.

We are in the mid 1600s when the curtain of melodrama rises on the story of Semiramis; and her role from the outset is that of an exceptional protagonist. […]

The distinction of writing the first lyric opera dedicated to this queen of antiquity goes to Francesco Sacrati with his (and the poet Bisaccioni’s) Semiramide in India (Venice, 1648); he is followed by Legrenzi (Nino il Giusto, Ferrara, 1662), Cesti (Vienna, 1667), Ziani (Venice, 1670), Draghi (Vienna 1673). Then in 1714 comes the libretto that Francesco Silvani, taking great liberties with the ancient sources, writes for Pollarolo: a libretto that for some years will enjoy considerable success (it will be scored by Leo, Vivaldi, Jommelli…). […]

Metastasio, in writing his Semiramide riconosciuta for Leonardo Vinci (Rome, 1729), chooses the subsequent phase of the queen’s life, and does so by reworking the narratives of Pompeius Trogus and Justin: Nino is dead; their son Ninia is weak and unfit to rule. Donning male clothing in order to pass herself off as her son in the role of the new king of the Assyrians, S. has audaciously assumed power. She is a stateswoman, acting to safeguard her own kingdom, for the security of her own people. […]
The thrilling intensity of Metastasio’s verses and the depth of character of S., never before so sublime in her dual nature, as a woman of touching fragility and as a wise ruler, will make this one of the “best-sellers” of eighteenth-century melodramas. Many composers will set it to music (among others, Porpora, Giacomelli, Handel — pillaging Vinci in particular, for his pasticcio of 1733 — Lanpugnani, Jommelli — in two different versions — Hasse, Gluck, Manfredini, Sarti, Sacchini, Bernasconi, Myslivecˇek, Traetta, Bertoni, Salieri), continuing right up until 1819, with the young Giacomo Meyerbeer, at that time resident in Italy. […]

The thrilling intensity of Metastasio’s verses and the depth of character of S., never before so sublime in her dual nature, as a woman of touching fragility and as a wise ruler, will make this one of the “best-sellers” of eighteenth-century melodramas. Many composers will set it to music (among others, Porpora, Giacomelli, Handel — pillaging Vinci in particular, for his pasticcio of 1733 — Lanpugnani, Jommelli — in two different versions — Hasse, Gluck, Manfredini, Sarti, Sacchini, Bernasconi, Myslivecˇek, Traetta, Bertoni, Salieri), continuing right up until 1819, with the young Giacomo Meyerbeer, at that time resident in Italy. […]

But it is Nasolini’s opera, above all, that brings the queen superbly into the new century: the effectiveness of his dramatic setting make it one of the favourite works of the leading singers of the age, who, although at the cost of some conspicuous reworkings and interpolations, ensure its survival well beyond the death of its composer. When Nasolini’s opera is staged in Naples in August 1815 the singer Isabella Colbran does not hesitate to interpolate the intense cavatina “Son infelice, son sventurata”, composed by her celebrated teacher Girolamo Crescentini, and she becomes a promotor of unexpected pastiche: the great scene at the end of act one (culminating with the aria “Qual pallor? Qual tema? Ardire!”), combines Nasolini’s original music with large extracts from Marcos António Portugal’s La morte di Semiramide (a work, for which Sografi’s libretto was adapted by Giuseppe Caravita, that from its first performance in Lisbon in 1801 became something of an international signature piece for Angelica Catalani), as well as a cabaletta penned for the occasion by Giacomo Rossini, no less (as attested by the presence of an extended quotation from La Cambiale di Matrimonio, composed by him five years earlier). Rossini was in fact in Naples at that time, where he was to have had his debut at the San Carlo theatre with his Elisabetta (and with Colbran as leading lady): this incognito collaboration in La Morte de Semiramide must have been for a way for Rossini to sound out the Neapolitan public’s taste and, at the same time. […]

Begun under the aegis of S., Rossini’s artistic collaboration with Isabella Colbran (who in 1822 was to become his wife) is also sealed by S.: Semiramide (Venice, 1823) is the last opera that Rossini composes for Isabella; and it is actually while working with the librettist Gaetano Rossi on his own musical portrait of the Assyrian queen that Rossini takes his leave of Italy, almost as if entrusting to this work a first aesthetic testament. The cavatina “Bel raggio lusinghier” occurs in the first act: S. is rejoicing in the return of Arsace, in whom is placed her hope of dispelling the clouds that have for some time been overshadowing her kingdom and her mind. And it is this aria, in Rossini’s opera, that is S.’s first true “solo”, her true introduction. Preserved in the autograph manuscript, alongside the definitive text, is a previous version, where the vocal line is complete, but which in the final part is almost entirely lacking in orchestration. The cavatina, which in this earlier form is not followed by the famous cabaletta “Dolce pensiero”, is envisioned as an independent piece punctuated with elaborate cadential phrases: and it is this very version, a perfectly judged portrait, that we have decided to publish here. […]

To Manuel García, who sang Idreno in the 1824 London production of Rossini’s Semiramide, we owe S.’s first visit to the New World: it was he who, as producer, staged Rossini’s opera at New York’s Park Theatre during the 1825-6 season, entrusting the lead role to his daughter Maria (the future Maria Malibran). Then in May 1828 his own Semiramis premiered at the Teatro de los Gallos in Mexico City. Although composed in Italian, based on Gaetano Rossi’s libretto, García took the trouble to translate it and have it sung in Spanish, the better to win the public’s approval. […]